My short story Plane Spotting was published in the Dostoyevsky Wannabe Cities: Birmingham anthology in March.

Dostoyevsky Wannabe is a Manchester-based independent publisher, with simple, eye-catching cover design and uses Amazon’s print-on-demand service. This means only books that are bought are printed, so there’s no need for heavy investment in long print runs that may never sell through. The books are then made available at a very low price (Dostoyevsky Wannabe Cities: Birmingham is just £4). It’s a great platform for exciting new and different literature.

The range of Dostoyevsky Wannabe Cities anthologies is just a few years old. Each book features a selection of writing from one city at one time as chosen by a guest-editor, who’s responsible for all editorial and the selection process. In the case of the Birmingham anthology, this role is filled by CD Rose, whose recent novels include the glowingly reviewed Who’s Who When Everyone is Someone Else.

He’s picked an eclectic mix of essays, flash fiction and short stories from writers born, living in or intimately acquainted with England’s second city. The result amounts to an artistic and creative guided tour of the city’s past, present and even future.

There’s a very generous and astute review of the anthology on the Librocubicularist website.

My own story is slotted in among a cast of stellar writers whose work I rate. I was looking forward to there being a book launch event but unfortunately the coronavirus outbreak put a stop to that. So instead, one of the authors, Garrie Fletcher, came up with the great creative alternative of a podcast launch instead.

You can hear several of the authors discuss their relationship with Birmingham and read from their work – and here’s my episode.

I was born and grew up just down the road from Birmingham in Coventry. I spent many weekends in Birmingham as a kid and young man. We’d go see bands at the Digbeth Institute and the Hummingbird, or go clubbing at Wobble in Hockley, which had this sprung dance floor.

And I seem to be coming back to Birmingham more than ever now, as part of Writing West Midland’s Room 204 and for meetings of the Tindal Street Fiction Group which meets fortnightly in Moseley.

Chris Rose invited me to submit to the anthology. He told me by email it should be odd or strange, and over a pint in the Ruin in Digbeth he added that it should be weird.

As the deadline drew closer and inspiration hadn’t yet smacked me between the eyes, I scavenged through some of the anecdotes, images and part stories I had jotted down in various notebooks and started out doing a kind of Edward Scissorhands job at first, and then it started to take shape and direction on the page.

It meant that I threw a load of different ingredients and locations into the mix – there’s the now derelict St Margaret’s mental hospital in Great Barr, the skies above Birmingham airport’s flight path, the unexpected impact of the millennium bug 20 years on, all wrapped up with an unreliable narrator.

The result is my story titled Plane Spotting. Get a copy of the book here, and listen to me read an extract from it here. 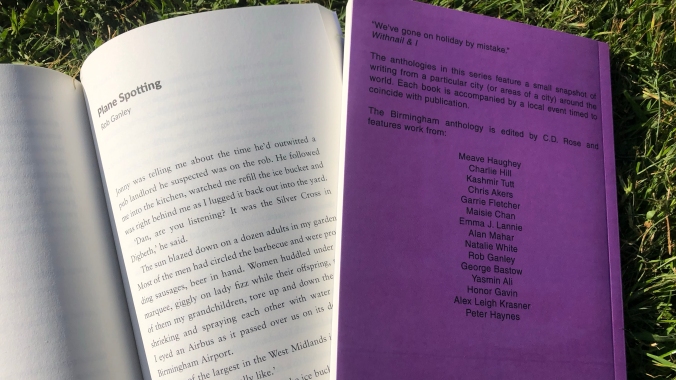